HOW TO MAKE SLIME

Face it — your kids will never stop begging for it. Just give in and make some slime! 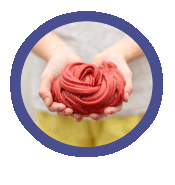 If you’ve got kids, chances are you’ve heard of slime. It’s everywhere! At home, at school, at every kid’s party you’ve gone to – and on the floor. In fact, you’ve probably got some stuck to your shoe right now.

Here’s a way to make some slime of your own. Using just glue, water and Borax, your little slime fanatics can whip up a batch of the sticky, gooey, slimy substance for a fun afternoon project. Remember it’s not for eating, though, so make sure the kids keep it out of their mouths – and off that floor.

Show your child the materials; Borax, white glue and water. Reinforce that you will be doing this step by step; together, and that the materials should not be eaten!

There are two components to slime. There is a borax and water solution and a glue, water, and food coloring solution. Prepare them separately.

What’s going on? The borax is acting as the cross-linking agent or “connector” for the glue (polyvinyl acetate) molecules. Once the glue molecules join together to form even larger molecules called polymers, you get a thickened gel very similar to slime.