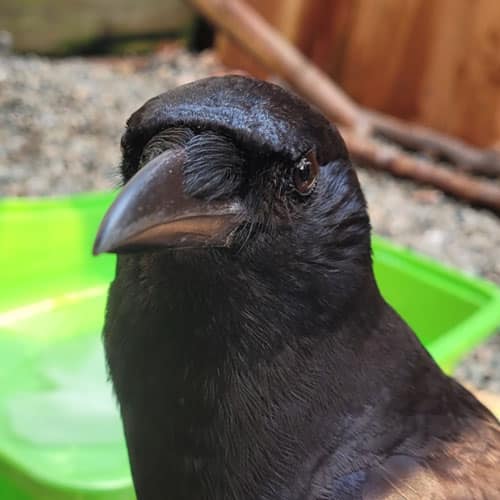 This animal can be observed in CuriOdyssey's Garden Aviary.

This bird was found by a person who said it landed on their shoulder. The bird is calm and friendly around people, so believed to be habituated at a young age. Donated from Wildlife Care Association June 2020.

Crows are all black in color, even the legs and bills, and their feathers have a glossy slightly iridescent look. In addition to roosting and foraging in numbers, crows often stay together in year-round family groups that consist of the breeding pair and offspring from the past two years. Crows are capable of working together, problem-solving, and being resourceful in their food habits.

American Crows can be distinguished from Common Ravens most easily by size (ravens are much larger), by vocalizations (ravens have a deeper, throatier call), by the bill (ravens have a thicker beak with a slightly bigger curve at the end), and by the shape of the tails in flight (ravens have more of a wedge-shaped tail compared to the fan-shaped tail of crows).

What do American Crows eat?

At CuriOdyssey, we serve our crow fruits, vegetables, feline kibble, whole prey, nuts, crickets, mealworms, and hard-boiled eggs. In the wild, crows consume a wide variety of plant and animal matter, including carrion.

How long do American Crows live?

Where do American Crows live?

Crows are arboreal, diurnal and omnivorous. They are widely distributed throughout North America. Crows breed from British Columbia to Newfoundland and south to southern California, Florida and the Gulf coast. They winter as far as southern Canada.

No special status, although corvids are now protected under the Migratory Bird Treaty Act.