HOW TO MAKE A PAPER AIRPLANE 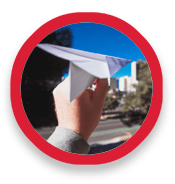 Making paper airplanes might be one of the oldest activities around, but this simple project can make your child’s mind soar as they get a taste of physics and engineering.

In this activity, students will have an opportunity to build a paper airplane and then make many changes to observe how the flight of the plane changes. Plus, all you’ll need is paper and a paper clip to have your little pilot ready for takeoff.

There are four forces that act on an object in flight: thrust, drag, lift and gravity. Thrust is what pushes the object forward. Thrust is produced from an engine, an animal wing using muscles to push through the air, or your arm muscles when you throw your paper airplane.

Gravity pulls everything on Earth towards the center of the planet, in the opposite direction of lift.