Recently, CuriOdyssey’s young 8 to 10 year old geoscientist homeschoolers discovered two dead sharks at Coyote Point Park marsh and CuriOdyssey employees reported the findings to the Pelagic Shark Research Foundation soon afterwards.  These sharks were part of a massive leopard shark die-off documented by scientists for the past two years in the San Francisco Bay.  A team of organizations joined forces to identify the reasons for this massive die-off apparently centered around Redwood City in San Mateo County.  Researchers from The Pelagic Shark Research Foundation and Sharks Stewards  are documenting the die-off, recovering some of the sharks and sending samples for analysis to California Fish and Wildlife to identify the cause. 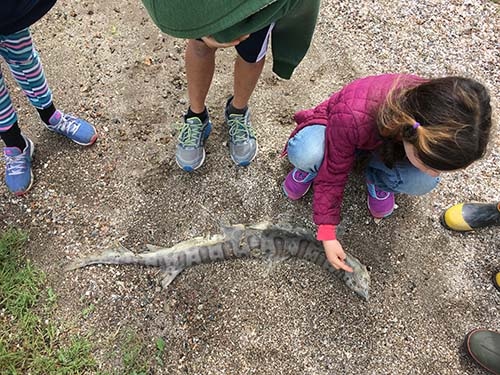 These sharks and even healthy sharks have been found with lesions and extremely high levels of toxins in their systems, as well as bacterial, viral and fungal infections. The pathogens that led to these infections seem to have originated from stagnant water trapped in the tide gates that were constructed years ago to protect man-made structures built over marine estuaries from high tides. These flood gates are closed when heavy rains are expected and street toxins, sewage, and other pollutants build up, initiating a proliferation of harmful pathogens. When the gates are opened, the stagnant water is released into the wider bay all at once, exposing marine life like leopard sharks to harmful infections. 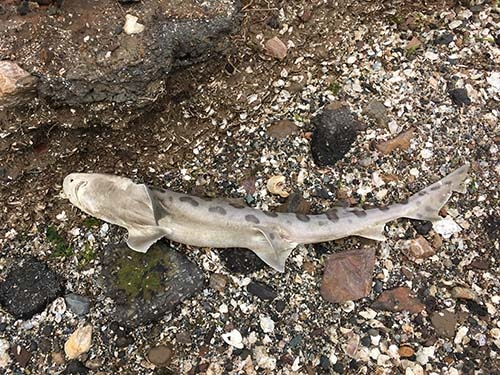 Sharks have been around since before the dinosaurs and as the most common species of shark in the bay, leopard sharks are a very important part of our local ecosystem and food web.  When any part of the food web is disrupted, populations in the levels below and above could shift out of balance. A balanced ecosystem is critical to the environment and provides important economic benefits to us including life sustaining systems such as nutrient cycling, and resources such as food. A healthy bay and ocean provides nutrients for phytoplankton which in turn provide air for us to breathe and provisions such dungeness crab for us to eat. Leopard sharks are a truly essential part of the food web that help support a balanced and healthy marine ecosystem in San Francisco Bay. 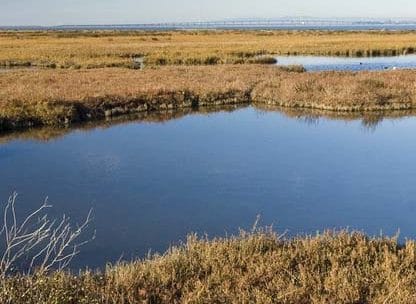 What can we do to help? Restoring our salt-water estuary and wetlands would make a positive impact to the health of our bays. These estuaries and wetlands provide many functions including serving as a natural as a bio-filter, and storm surge buffer, and providing habitat for many of the diverse, often unique members of the ecosystem that occur nowhere else in the world. You can help at home by making environmentally responsible purchases and reducing, reusing and recycling. If you have a few hours to help preserve our bay, volunteer with Save The Bay, or participate in Coastal Cleanup Day on Saturday, September 16, 2017.

Additionally, if you find a dead shark or ray, call the Pelagic Shark Research Foundation (831) 459-9346 or (831) 600- 5214. You can also take a photo and contribute to the Citizen Science data collection online at https://www.inaturalist.org/projects/leopard-shark-and-bat-ray-die-off.

If you want to learn more about the issue from the experts scoping our local leopard shark die-off, listen to the podcast on KQED’s Forum.

Posted in Science News
← Science in Our LivesEndangered Species Day is May 19th, 2017 →