All of CuriOdyssey’s animals have a unique story.  What they have in common is due to their circumstances; our animals have been deemed non-releasable because they would not likely survive in the wild.

A number of CuriOdyssey’s animal residents were former pets, which include Sierra the coyote (Canis latrans), Gunner the North American river otter (Lontra canadensis) and Charuka the common raven (Corvus corax).  Because wild animals are unpredictable, often territorial and have demanding requirements, they do not make good pets and may require special permits to obtain. 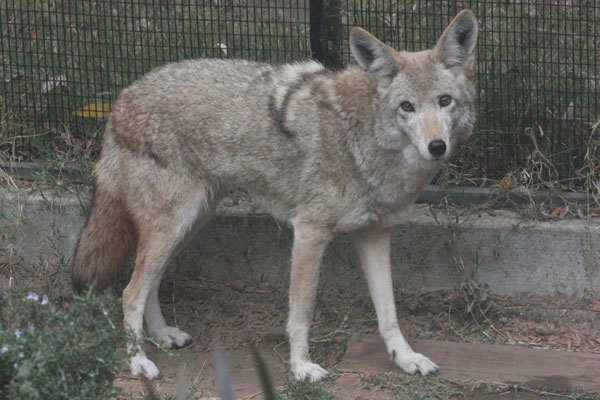 Sierra arrived at CuriOdyssey in 1997.  It is also not known how she came to live in a domestic household, but Sierra’s owners surrendered her to the Stanislaus Wildlife Care Center when she was roughly one year old.  Because she was raised by humans at such a young age, Sierra is imprinted.  This means that she is dependent on people to fulfill her needs.  Because Sierra has never hunted before or lived with other coyotes, she seeks out humans when she wants food or socialization.  Wild animals generally have a healthy fear of humans, but as an imprinted animal, Sierra would likely approach humans if she were released into the wild.

Today, Sierra is a healthy, 16-year-old canine.  As an older dog, she now spends more time sleeping, however, she continues to get enrichment everyday (such as toys, smelly objects from other animal exhibits and food hidden in boxes). Sierra is also trained by our animal keepers to go into her crate, receive injections and step onto a scale.  This allows her to participate in her own health management.  Sierra is one of CuriOdyssey’s most popular animals and serves as a wonderful ambassador for wildlife.  Visitors get the rare opportunity to see a coyote up close, learn about the role coyotes serve in the ecosystem, and discover Sierra’s personal story. 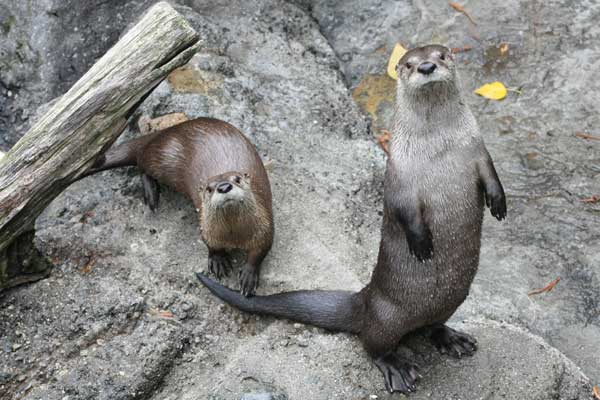 Gunner (right) is another a popular resident at CuriOdyssey.  He was born in Washington, in 2009 and found by people who believe his mother abandoned him.  These people feared that if Gunner was brought to a rehabilitation center he would be euthanized, so they decided to raise him as a pet in their household.  Unfortunately, Gunner’s owners were misinformed because rehabilitation centers specialize in bringing animals back to health so they can be released; they do not euthanize healthy animals.  Later that year, his owners realized they could not provide the care a river otter needs and eventually brought him to the Raptor House Rehabilitation Center.  Similarly to Sierra, Gunner is now imprinted on humans and cannot be released back into the wild.  Had his owners brought him directly to a wildlife rehabilitation center when they found him, Gunner would likely have been re-released.

When Gunner arrived at CuriOdyssey, he was introduced to Belle, another young river otter that was deemed non-releasable.  Since their introduction, Gunner and Belle are inseparable.  They can be seen eating, swimming, playing and sleeping- but whatever they are doing it is always together!  At CuriOdyssey, our otters are fed a wide variety of foods and given enrichment items such as jolly balls, foraging toys and tunnels.  Both of our otters are being trained to go into crates, receive injections and step onto scales as well.  Because Gunner is from the wild, his genes are valuable to the captive river otter population.  This is because inbreeding can occur among captive animal populations if new individuals are not being brought in from the wild.  It is our hope that one day Gunner and Belle will have pups.  In the meantime, Gunner and his gal pal will continue to serve as very interactive exhibit animals that inspire visitors to reduce their impact on the environment. 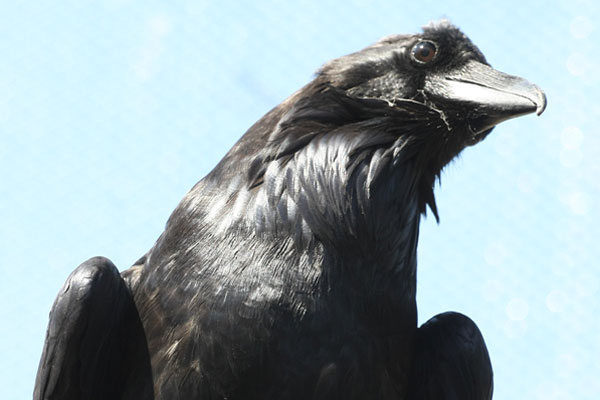 If you walk into CuriOdyssey’s raptor aviary and hear a two-tone whistle, chances are it may be Charuka.  Not much is known about her past, but she was found with garbage bag twist ties on her legs and her wings were badly clipped, leaving her with permanent feather damage.  Because of this, Charuka was likely a former pet that was released by her owners or escaped from them.  She arrived from Wildcare in 1998.  Upon arrival, it was clear that Charuka was imprinted due to living in captivity.  She is not fearful of humans.  Because ravens have the ability to mimic, Charuka and her raven roommate Onyx will often say “Hi,” “Hello,” and “Come here” in a man’s voice.  This is curious because all of our animal keepers are women!

Charuka seems to enjoy interacting with toys, eating mealworms and stashing her food.  If you see small piles of mulch in her exhibit, chances are there is food hidden under them!  Her most favorite enrichment item seems to be our keepers’ shoes.  Her primary trainer notes that during training sessions, Charuka often gets distracted by shoes and tries to peck them.  She is currently trained to follow a target and is learning to go into a crate and onto a scale.  Because ravens are often portrayed negatively in the media, Charuka serves as an animal ambassador to let visitors see that ravens are incredibly intelligent birds with colorful personalities.
– post and photos by Rachael Tom

Posted in Animals
← Autumn in the Bay AreaAnimal X-Rays →