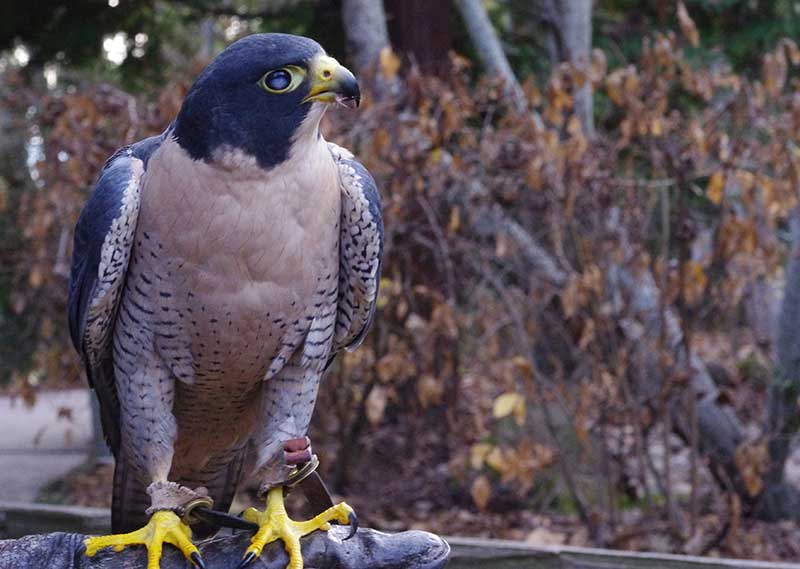 Our falcon was found as a young bird by a private citizen and taken to the Pasadena Animal Shelter. Although the bird was taken care of, he was never flown or taught how to hunt. The shelter finally called the Ojai Raptor Center (ORC) to take him in 2005. Once at the ORC, he was placed with an experienced falconer who would condition him to fly and hunt. In 2007, right before he was slated for release, he injured his right eye. After that he was deemed un-releasable and stayed at the rehabilitation center as an education bird. In 2011 the center decided to place him at another facility. On December 2, 2012, he came to live at CuriOdyssey.

Peregrine falcons have excellent eye sight and can see a pigeon at rest from 3000 feet away.

What do Peregrine Falcon eat?

Peregrines prefer to eat birds over other food items, but they will eat anything that is small enough for them to catch and kill. At CuriOdyssey, they are served mice, rats, chicks, quail, occasionally guinea pig and rabbit.

How long do Peregrine Falcon live?

Where do Peregrine Falcon live?

Open rocky land, rocky coasts wooded areas, and moorland. They are found on every continent except Antarctica.

They were taken off the Threatened Species list in 2009, although they are still protected under Migratory Bird Treaty Act.

Your contribution helps provide my food, toys, and medical care. I’ll stay at the museum, and you’ll get a photo of me and a certificate as reminders of your generosity. Check out our adoption section and see all of our adoption levels.